Double Jeopardy: How Third-Grade Reading Skills and Poverty Influence High School Graduation Educators and researchers have long recognized the importance of mastering reading by the end of third grade. Students who fail to reach this critical milestone often falter in the later grades and drop out before earning a high school diploma. Now, researchers have confirmed this link in the first national study to calculate high school graduation rates for children at different reading skill levels and with different poverty rates. Results of a longitudinal study of nearly 4,000 students find that those who don’t read proficiently by third grade are four times more likely to leave school without a diploma than proficient readers. 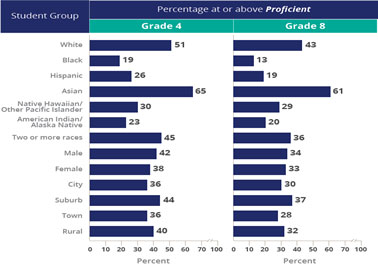 For the worst readers, those couldn’t master even the basic skills by third grade, the rate is nearly six times greater. While these struggling readers account for about a third of the students, they represent more than three fifths of those who eventually drop out or fail to graduate on time. What’s more, the study shows that poverty has a powerful influence on graduation rates. The combined effect of reading poorly and living in poverty puts these children in double jeopardy.  Meanwhile, the National Assessment of Educational Progress (NAEP), also known as the “The Nation’s Report Card,” shows for 2009 that only 33 percent of fourth graders read at a 5 “proficient” level, while the remaining 67 percent do not, and instead read at the “basic” level (34 percent), or below the basic level (33 percent).7 “Fourth grade students performing at the Proficient level should be able to integrate and interpret texts and apply their understanding of the text to draw conclusions and make evaluations.”8 Thus, two thirds of students did not finish third grade with these essential reading skills, and are reading below grade level. This report presents the first-ever analysis of high school graduation rates separately for children with reading test scores that correspond roughly to the proficiency levels set by NAEP, with additional results for children reading below the proficient level, at either the basic or below basic level of reading test scores. Read More